He Hath Done All Things Well 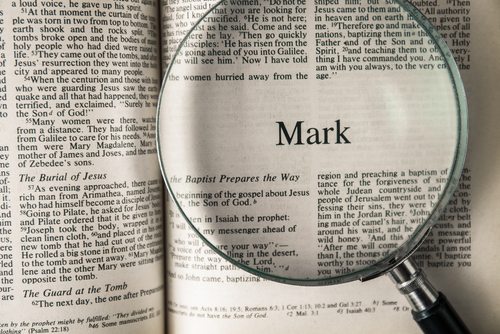 He Hath Done All Things Well

And were beyond measure astonished, saying, He hath done all things well: he maketh both the deaf to hear, and the dumb to speak.
Related Topics: Love, Preachers, Sacrifice, Salvation, Suffer, Mark 1990 - 1991, 1991, Mark
Print Sermon

HE HATH DONE ALL THINGS WELL

First of all, this is spoken of a country and a village preacher.  Mark 6:6, “He went around about the villages, the villages, teaching.”  Mark 6:56:

And whithersoever He entered, into villages, or towns, or country, they laid the sick in the streets, besought Him that they might touch Him, but the border of His garment: and as many as touched were made whole.

Their thinking is obvious, “This Man can lead an army to conquer the world.  If a soldier is killed, He can raise him from the dead [John 11:43-44].  And an army marches on its stomach, He can feed thousands and thousands on a handful of food” [John 6:9-13].  And they sought—the Gospel of John says—after the feeding of the five thousand [John 6:9-13], they sought to make Him a king [John 6:15].

It was the same kind of a thing that Israel experienced in 68 AD, just a few years after our Lord.  Josephus led the campaign there in Galilee, and they rebelled against Rome and finally encompassed all of the nation.  And of course, you remember that it resulted in the awful destruction of the nation in 70 AD.  It was there, and upon that occasion in the life of our Lord, that they sought to make Him a king [John 6:15].  They would descend upon Tiberias, where Herod Antipas was the tetrarch.  And they would then conquer the whole Palestine area, and then against Rome itself.  Jesus, the king [John 6:15].

Our Lord refused it the same kind of a way that He did the third and climactic temptation of Satan.  Satan brought before the Lord, in an instant of time, all the kingdoms of the world and their glory, and said to our Savior, “You bow down and worship me, and all of these kingdoms I will give to You.”  He refused [Matthew 4:8-10].  This is the same temptation to our Lord, “You let us make You a king, and we’ll conquer the world and You will preside over the nations and all of their glory” [John 6:15].  What a temptation!

And the disciples were those who were egging it on, agitating it affirmatively.  The Bible here says that the Lord sent away the disciples and He Himself went apart into a mountain alone to pray [John 6:15-16].  And there on His knees, He refused the glittering, golden crown for a cross.  There He chose the Via Dolorosa to a hill called Golgotha [Matthew 27:33], instead of the Appian Way to a hill called Capitoline, on which dwelt the Caesars of the Roman Empire.  And when I look upon my kneeling Lord and think of what He has chosen for me; the cross, and the suffering, and expiation attendant with my sins, I cannot say anything but the text of the Book, “He hath done all things well” [Mark 7:37].

Following through in the story of our Lord in Mark: a third—the first part of the entire chapter of the seventh of Mark is devoted to a discussion of our Lord with those who define religion in terms of ceremony and ritual [Mark 7:1-4].  They, the Pharisees, found fault with our Lord and they said to His disciples, “You eat bread with defiled hands,” that is, unwashed hands [Mark 7:5].  And they found fault.  And in the long discussion our Lord replied [Mark 7:6-13]:

There is nothing from without a man, that entering into him can defile him.

but the things which come out of him, those are the ones, the things that defile the man—

That which cometh out of the man, that defileth him, for from within, out of the heart, proceed evil thoughts.

All kinds of sins: these evil things come from within, not from without, and they defile the man.  Our Lord thought nothing of the workman’s hands that were covered with dirt, but He said it is the inside of the man that in his evil propensities and affinities can defile him [Mark 7:15].

You know, it is a strange thing, what ceremonialism and ritualism does to religion.  When it comes in the door, holiness and righteousness and godliness fly out the window.  Our Lord taught us it is not by the posture of the body, but by the thinking of the heart that a man is defiled or is separated from God [Mark 7:15].  It is not the outside things that we do; it is the inside things that we feel and think that proceed into the evil of a man’s life.

And when I think of the teaching of our Lord, not ritual, not ceremony.  Strange to me the more worldly people are, the more they love ritual and ceremony.  Jesus cut through it all.  The real faith and the real religion is always one of the soul and of the heart, and not of the ritual and of the ceremony.  And when I think of the truth of my Savior, I also avow, it seems to me, He has done all things well [Mark 7:37].

I turn the page and come to the beautiful passage that you read, the healing of this man in the seventh chapter from [verses] 31 to 37 [Mark 7:31-37].  In this story our Lord, healing a deaf man, touched his ears and touched his tongue and healed, gloriously, miraculously, this man, deaf and dumb [Mark 7:33].  In other instances like this, the Lord just spoke a word and the afflicted one was healed [Mark 10:46-52].

Let me imagine for a moment, and you come along with me: Bartimeus, blind, was healed with our Lord’s miraculous grace with just a word.  Our Lord spoke the word, and Bartimeus was miraculously able to see.  He opened the eyes of that blind man with just a word [Mark 10:46-52].  In Jerusalem, our Lord met a blind man, and He made a clay and anointed his eyes and sent him to the pool of Siloam to wash.  And when the man washed in the pool of Siloam, he could see.  He was miraculously healed; his eyes were opened [John 9:6-7].

I want you to come with me and imagine a convocation of, say, these who had heard and seen the Lord, Christian people.  And they are testifying as to how Jesus saves and how Jesus heals.  And blind Bartimeus, who now can see, stands up and he says, “This is the way that Jesus opens the eyes of the blind.  This is the way Jesus heals.  He speaks the word, and you can see” [Mark 10:46, 50-52].

I want you to know that I have heard endless discussions all the days of my life of how Jesus saves.  And they argue, and sometimes vigorously confront each other, about how Jesus saves.  I have been in assemblies that have avowed if you did not have a marvelous and indescribably glorious experience of conversion and being born again, you haven’t been saved, you haven’t been born again [John 3:3, 7].

There are those who are saved like the Apostle Paul [Acts 9:1-6]; they had a marvelous, wonderful experience on the way to Damascus.  There are those who are saved, such as the Philippian jailer [Acts 16:26-31], in an earthquake, in a shaking of the whole universe itself.  That’s right.  And I rejoice when a man can stand up and recount an incomparably glorious experience of salvation when he met the Lord and was born again [John 3:3, 7].  But there are those also who say, “I was saved like James and John, in a quiet morning meeting with the Lord Jesus, no earthquake, no glorious vision from heaven above the shining of the sun.  In just a quiet way did I meet the Lord.”

Sweet people, we all have different experiences of conversion.  But the difference doesn’t mean yours is genuine and mine is not.  We are saved in different ways, in different experiences.  “Preacher, when I was saved, I couldn’t see the preacher for crying.  I just responded that way.  My whole heart melted in tears.”  You who have been here to church know so often times do I cry in the service.  I have asked God to deliver me from it.  And the Lord whispers to me, “I will be glorified in your tears as much as in your preaching the infallible and inerrant Word.”  So I just cry and ask God, and you to understand.  That’s the way I was converted; that was my response to the Lord—in many, many tears.  But that does not mean you did not meet the Lord.  That does not mean you were not really converted when just quietly you gave your heart to Jesus.  Or once in a while a man will shout.  And once in a while he will laugh.  And once in a while he will smile in gladness and happiness.

Jesus began to teach that the Son of Man must suffer many things,

be rejected of the elders and of the chief priests, and scribes,

and be killed, and the third day be raised again.

The atonement of our Lord, all sufficient; as Titus says, “Not by works of righteousness which we have done, but according to His grace and His mercy He saves us” [Titus 3:5].

As Paul writes in Ephesians, “For by grace are ye saved through faith; and that not of yourselves: it is the gift of God:  Not of works, lest any man should boast” [Ephesians 2:8-9].  Saying, “Look what I did.  I did it.”  He did it all; our salvation is in His completed, atoning sacrifice, all of it is of Him.  And of me there is just thanksgiving and gratitude and love for what God has done for me.  He did it all; He paid the price.

Could my tears forever flow,

Could my zeal no languor know,

These for sin could not atone;

Thou must save, and Thou alone:

In my hand, no price I bring,

Simply to Thy cross I cling.

[“Rock of Ages,” by Augustus M.Toplady]

Jesus did it all and the life that I live in the flesh, I live by the grace of God [Galatians 2:20], in thanksgiving and gratitude for what He has done for me.  His completed and perfect sacrifice [Ephesians 5:2; Hebrews 10:10]; in all things He hath done marvelously well [Mark 7:37].

Come with me for a moment.  I have stood in the Dresden gallery looking at Raphael’s Transfiguration.  Dear me!  How could an artist catch the glory of our Lord as Raphael did?  In His transfiguration, Jesus glorified [Mark 9:1-7].  I have stood, as you have, in the Louvre in Paris and looked at Leonardo da Vinci’s Mona Lisa.  What a wonderful depiction of a girl that he loved and painted her picture, beautiful.  I have stood, as you have, in the church in Rome and looked at Michelangelo’s Moses.  One of the most marvelous pieces of sculpture you could ever think for.  I have a copy of it in my study.  I have been, as you have, in Florence, in the Florentine gallery there and looked at Michelangelo’s David.  How could any man do that, perfection?