A Regeneration In Confession 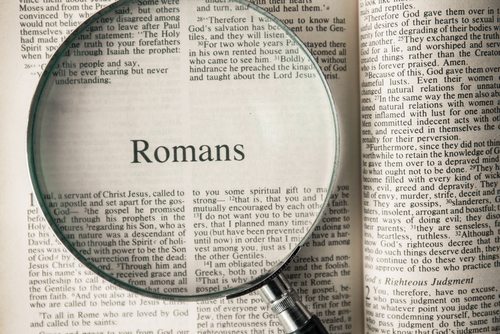 A Regeneration In Confession

That if thou shalt confess with thy mouth the Lord Jesus, and shalt believe in thine heart that God hath raised him from the dead, thou shalt be saved. For with the heart man believeth unto righteousness; and with the mouth confession is made unto salvation. For the scripture saith, Whosoever believeth on him shall not be ashamed. For there is no difference between the Jew and the Greek: for the same Lord over all is rich unto all that call upon him. For whosoever shall call upon the name of the Lord shall be saved.
Related Topics: Confession, Regeneration, Salvation, The Golden Chain of Salvation (Pre-Easter '87), 1987, Romans
Print Sermon

A REGENERATION IN CONFESSION

As has been suggested, the theme for the seventy-first year of our annual pre-Easter services is “The Golden Chain of Salvation.”  Yesterday: A Turning in Repentance; today, A Regeneration in Confession, a confession unto salvation; tomorrow, A Baptism Into the Family of God; on Thursday, A Growing in the Grace of Our Lord; and on Friday, Our Entrance Into Heaven; today, regeneration in our confession, a confession unto salvation.

If thou shalt confess with thy mouth Jesus as Lord, and believe in thine heart that God raised Him from the dead, that He lives, thou shalt be saved.

For with the heart one believeth unto a God-kind of righteousness; and with the mouth confession is made unto salvation.

For whosoever shall call upon the name of the Lord shall be saved.

A confession unto regeneration, unto salvation.

In these years past, I was conducting a series of revival services in one of the great universities of America.  The men who had made possible that convocation in the name of the Lord, made an arrangement for me to speak to all of the athletes of the great university in their athletic dormitory.  And the purpose was to get all of those men in the athletic programming of the university to come to the services in a body one night.

So I made my best appeal, and after I had done what I could to encourage them to attend, they asked me to leave; they were going to discuss the possibility.  And after I was absented for ten or fifteen minutes, why, they asked me to return.  And in the group was a world famous Olympic star.  He was the spokesman for the athletic men in the dormitory.  And the Olympic star said to me, “After discussion we have agreed that we’re coming to the service one night, and we’ll all be together.  But we want you to understand, there’s none of this coming to Jesus stuff for us, and there’s none of this coming down the aisle to confess the Lord for us.”  Then he added, “If fire were to fall down from heaven, we will not go down that aisle.”  Then you cannot be saved.

I’m looking for his faith, and I see his cerebellum, and his pituitary gland, and there are his tonsils and his bicuspids, and here’s his lung.  There’s his liver.  Here’s his gizzard; come on down, here’s his femurs.  There’s his tibia, here’s his fibula.  Finally here’s his tarsals, his metatarsal, and ultimately, his corns, bunions, and toenails.  And I haven’t found his faith yet.  Well, maybe I overlooked it.  So I examined his tensor fasciae lataes and his semimembranosus, and I don’t find faith in him.  But you say he has faith, then faith must be something that the man does.  It must be something that characterizes his life and his walk.  Faith, it’s like love.  It’s expression of the thing that is the thing itself.

I one time heard of a man who hadn’t kissed his wife for twenty years, and he shot another man for doing it.  Love is the expression of something, and if you don’t express it, you don’t have it.

A mother came up to me one time and said, “What am I going to do with this ragamuffin boy of mine?  I can’t get him to comb his hair.  I can’t get him to tie his tie.  I can’t get him to shine his shoes.  I don’t know what I’m going to do with him.”  I said, “Mother, forget it, forget it. By and by there’ll come traipsing along a little blond, blue-eyed, lace-covered doll, and that boy will put axle grease on his hair.  He will learn to tie his tie a dozen different ways.  He’ll shine his shoes.”  He’s got it.  How do you know he’s got it?  By the way he acts, by the way he does.  It’s something you do.

Faith is exactly like that.  Faith is something that characterizes your life.  The Bible will say in Hebrews 11: “By faith Noah.”  What do you know, “By faith Noah”?  Because when God said He was going to destroy the world, he believed it, and he built an ark [Hebrews 11:7].  Same chapter says, “By faith Abraham.”  How do you know by faith?  Because when God called him he went out as a stranger and a pilgrim in the earth, looking for “a city which hath foundations, whose builder and maker is God” [Hebrews 11:8-10, 13].  Same chapter says, “By faith Moses.”  How do you know by faith?  Because he refused to be called the son of Pharaoh’s daughter, and despising the allurements and emoluments of being a pharaoh, he cast his life and lot with the people of God [Hebrews 11:23-25].  Faith is something you do.  It’s the way you act.

Not only that, but a second avowal.  It is the commitment of your life in public, open confession to Christ that is salvation itself [Romans 10:9].  That’s what it is, the substance of it.  The whole definition of it is the open, public unashamed commitment of your life to Christ.  That’s salvation.  “Whosoever shall confess Me before men, him will I confess before My Father in heaven” [Matthew 10:32].  “With the heart one believeth unto a God-kind of righteousness; and with the mouth confession is made unto salvation” [Romans 10:10].  That’s not strange or peculiar.  God has never deviated from that way of salvation through all of the millennia and the centuries of time.

When the Lord God said to the children of Israel in Egypt, “The death angel will pass over, but whoever displays the blood openly, unashamedly in the form of a cross on the lintel and on either side of the doorposts, when the angel passes over and he sees that blood, whoever lives inside that house will be saved” [Exodus 12:7, 13, 22-23], well, why on the front of the house?  Why on the lintel?  Why on the doorposts?  Why couldn’t the man sprinkle the blood or place the blood on the back door or inside the pantry or somewhere in a closet?  Because God has ordained that the way of salvation is to be open and publicly displayed and to be unashamed on the part of him who thus commits his life to God; there is no other way.  Salvation is the open, public, unashamed commitment and avowal of your faith and discipleship in the Lord Jesus.  And if I don’t do it, I am not saved.  Again I say there’s a reason for that and I can understand it.  To be ashamed of the Lord, and to disown and to disavow the Lord, breaks His heart.  Simon Peter cursed and swore, saying, “I never saw Him!  I never knew Him!” [Matthew 26:69-74]. And while he was cursing and disavowing, disowning, discrediting, the Lord turned and looked upon Peter, broke his heart.  He went out and wept bitterly [Matthew 26:75; Luke 22:61-62].

Our Lord, grant that we, in our day and before our generation, will thus be faithful to the Lord God who called us into such salvation, into such love and service.  O God, before an unbelieving, gainsaying world may we shine as lights, testifying to the love and grace of our blessed Savior, in whose precious name we pray, amen.