The Beginning of Wisdom 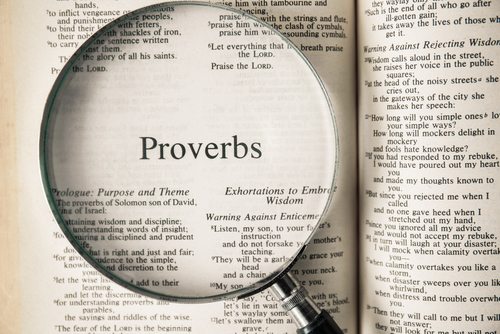 The Beginning of Wisdom

The fear of the LORD is the beginning of knowledge: but fools despise wisdom and instruction.
Related Topics: Atheism, Evidence, Fear of God, Knowledge, Rationalism, Wisdom, 1977, Proverbs
Print Sermon

THE BEGINNING OF WISDOM

There is a duality in education that is inescapable; and we see it illustrated in all of human history.  Education can be used for the glory of God or for the decimation of mankind.  When Martin Luther came leading the Reformation, there was with him immediately a band of scholars; and it was out of that scholarship, and that learning, and that teaching that the great Reformation found its force and its course.  And there came into Germany under Martin Luther, and under the days of the leadership of those men by his side, a marvelous renaissance in learning.  The universities of Germany began to flourish; scholars turned their faces toward that Deutschland from the ends of the earth.  The language flourished, the literature flourished; it was one of the great phenomena of human history, the exaltation of German learning, all because of the influence of Martin Luther and the Reformation.

In that same nation, in that same country, in those same universities, in that same language, and in that same literature there arose another leader by the name of Nietzsche; and there were a thousand like rationalists around him.  And under him, Germany was destroyed.  And we lived to see two terrible wars spawned out of the anti-God, anti-church, anti-Christ teaching of German rationalism.  Education is a two-edged sword: it can cut for God or it can cut for evil, for the decimation of the human family.

I remember the president of Baylor University, Samuel Palmer Brooks, speaking of heredity, and environment or education, saying, “I do not say,” quoting him, “I do not say that education, that environment is everything; but I do say that whether a child is a cannibal, or a goose-stepping Nazi, or a communist, or a Baptist, or a Catholic is due to his training.”  A child is like a piece of marble: out of it a Thorvaldsen can shape and chisel and cut and make an incomparable statue of our Lord, such as Thorvaldsen did in The Pleading Christ; or out of that same block of marble can be cut those statues that our American army cut down and forever destroyed out of the parks of Munich in Germany.  Oh Lord!  How shall we approach the knowledge of God and the wisdom of the Lord as we seek to teach our children?

Nor does wisdom lie just in skills.  I remember when the General Motors Company announced that they were building this great plant in Arlington.  With pride the War Department announced to the world that that plant, along with all of the other new plants built by General Motors, and Ford, and like corporations, that they were “dual purpose plants”; that is, in a moment, by a telephone call, the assembly line could be changed into the manufacture and production of guns, and tanks, and jet engines; instruments of war and destruction.  Skill is not wisdom.

Nor is achievement and success and fame wisdom.  Do you remember this unusual sonnet by Shelley?   The beautiful English poet wrote it in 1818, named “Ozymandias.”  Do you remember it?  The sonnet is this:

I met a traveler from an antique land

Who said: “Two vast and trunkless legs of stone

Half sunk a shattered visage lies, whose frown,

And wrinkled lip, and sneer of cold command,

Tell that its sculptor well those passions read

Which yet survive, stamped on these lifeless things,

And on the pedestal these words appear:

My name is Ozymandias, King of Kings:

Look on my Works, ye Mighty, and despair!

Nothing else remains.  Round the decay

Of that colossal Wreck, boundless and bare

The lone and level sands stretch far away.”

First, wisdom is the awe, the reverence that a man ought to feel in his heart when he comes before the great God of all the world.  Just to name His name humbles our hearts; and it seems that when we speak about the Lord, it ought to be on our knees, bowed in His presence.  The reverential awe—called in the Bible, “fear of the Lord”—the reverential awe of God is the beginning of wisdom [Proverbs 9:10].

And as a painter needs a canvas, so is the need of God to man.

“The fear of the Lord is the beginning of wisdom” [Proverbs 9:10].  It is in our coming before the Lord that we see the true nature of all that we observe around us.  There are some people that look into the chalice of the blue, blue sky, the glorious firmament above us, and all they see are distances, and measures, and weights, and light years, and space.  But there are some who can look up into the chalice of the sky and cry, “The heavens declare the glory of God; and the firmament showeth His handiwork.  Day unto day uttereth speech, and night unto night showeth knowledge” [Psalm 19:1-2].

There are those who can look at a tree and see nothing but petals, and trunk, and limbs, and branches, and leaves.  But a Joyce Kilmer could look and say:

I think that I shall never see

Anything lovely as a tree

But only God could make a tree

There are those that look at a flower, and see in it just anthers, and stamen, and petals, and calyx, and leaves, and branch, and stem.  But there are others, like an Alfred, Lord Tennyson, who could look at a flower:

Little flower in the crannies, I pluck thee

I hold thee in my hand, root and all

Little flower — but if I could understand

What thou art, root and all, all in all,

I could understand what God and man is

[from “Flower in the Crannied Wall,” Alfred, Lord Tennyson,1850]

Back of a beautiful little flower, the great Christian poet laureate of England saw the very soul, and hand, and workmanship of Almighty God.  That’s the beginning of wisdom: to stand before God’s creation in all the wonder of the depths of the knowledge that went back into the created universe around us—both in us, and above us, and beyond us, before us, and after us—and see in it all the hand and the presence of God.

A haze on the far horizon,

The rich, ripe tint of the cornfields,

And the wild geese sailing high;

And all over upland and lowland,

The charm of the golden-rod—

A picket frozen on duty,

A mother starved for her brood,

And Jesus on the rood;

And millions who, humble and nameless,

[from “Each In His Own Tongue,” By William Herbert Carruth]

The heart of wisdom can see Him everywhere.  That is the beginning of knowledge [Proverbs 1:7] and the fear and the wisdom of the Lord [Proverbs 9:10].

I must close.  In reading, as you do, in Roman history there was a tremendously gifted Roman general by the name of Pompey.  You remember it was at the foot of the statue of Pompey that Julius Caesar fell when he was stabbed by Brutus, and Cassius, and that conspiracy against him.  Pompey was an imperious Roman general.  He was the one that conquered Palestine, Judea, and added it to the Roman Empire.  He did that in 63 BC.  And when Pompey brought his Roman legionnaires into the Holy City, into Jerusalem, he immediately strode up to the temple, the house of God.  And standing at the door of the sacred sanctuary, he walked into the Holy of Holies and looked around him.  There to the right was the table of showbread, there to the left was the seven-branched lampstand, there before him was the golden altar of incense, and beyond that, the veil that separated between the holy and the Holy of Holies.  As the imperious Roman General Pompey stood there before the inner sanctuary, he made a movement as though he would pull aside the curtain and walk in.  No human man, no mortal man, had ever entered that Holy of Holies except the high priest one time a year, with blood of atonement and expiation [Hebrews 9:7].

And when the Jewish people, seeing that imperious Roman General Pompey deigning, proposing, thinking to enter the Holy of Holies, they fell down before him, and prayed, “Take our lives, sever our heads; but don’t desecrate the sacred sanctuary by entering into the Holy of Holies!”  Spurning and scorning, with imperious contumely, the prayers of God’s people, the Roman general strode to the veil and pulled it aside and walked in.  Came back out, and explained in exclamation to his generals and to the people, “Why, there is nothing in it.  It is absolute vacant.  There is nothing in it.”  And when I read that, in Roman history, I remembered that is the place, that is the exact place where Isaiah saw the Lord, high and lifted up, and His train filled the temple; and His glory clothed the world [Isaiah 6:1-3].  That is the exact place where Isaiah heard the voice of God, crying, “Whom shall I send?  And who will go for Us?”  And the young prophet answered, “Here am I, Lord; send me” [Isaiah 6:8], the exact place.

In a moment we must sing our hymn of appeal.  And while we sing it, a family you, to come into the fellowship of our dear church; a couple  you, to answer the call of God with your life; or just one somebody you tonight receiving the Lord Jesus as your Savior [Romans 10:9-13]; on the first note of the first stanza, come.  If you’re in that topmost balcony in the last row, there is time and to spare, come.  There’s a stairway at the front and the back and on either side.  Down one of these stairways, make your way to the front, “Pastor, the Lord has spoken to me and I’m coming.”

And the press of people on this lower floor, into that aisle and down to the front, “Here I am, pastor, I have decided for God and I’m standing before men and angels, confessing my faith in Him.”  As the Spirit of the Lord shall press the appeal to your heart, answer with your life.  Come now, do it now.  Make it now, while we stand and while we sing.

THE BEGINNING OF WISDOM

I.
Education can be for the glory of God or decimation of mankind

1.    Begins with
reverence for God

2.    It is coming
before God daily that we see the true nature of the world around us

3.    Found in the
humble acceptance of Christ Jesus