The Atonement For Sin 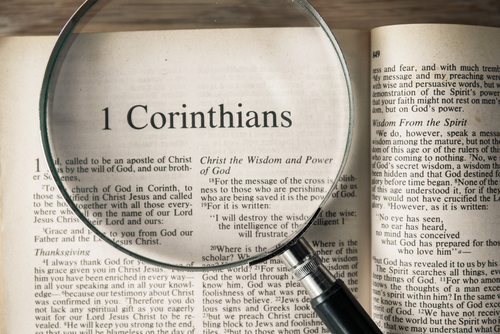 The Atonement For Sin

Moreover, brethren, I declare unto you the gospel which I preached unto you, which also ye have received, and wherein ye stand; By which also ye are saved, if ye keep in memory what I preached unto you, unless ye have believed in vain. For I delivered unto you first of all that which I also received, how that Christ died for our sins according to the scriptures; And that he was buried, and that he rose again the third day according to the scriptures:
Related Topics: Atonement, Blood, Cross, Death, Gospel, Justification, Love, Missionaries, Sacrifice, Sin, The Great Doctrines of the Faith (Pre-Easter '73), 1973, 1 Corinthians
Print Sermon

In these few moments that we have at noonday this week, the theme of the pastor’s messages is "The Great Doctrines of the Faith":  Monday, The Reality of God; yesterday, The Incarnation of Christ, the Word; tomorrow, The Resurrection of the Dead; Friday, The Second Coming of Christ; and today, The Remission of Sins: the doctrine of atonement.

There are many biblical scholars who will say that the high water mark of all revelation is the [fifteenth] chapter of the first Corinthian letter.  Whether that is true or not, it is one of the superlative revelations of God to be found in the Bible.  As you know, it is the great resurrection chapter.  And it begins with a definition of the gospel.  If somebody preaches the gospel, what does he preach?  If you send out a missionary to preach the gospel, what does he say?  Authoritatively, by inspiration, it is defined like this:

Moreover, my brethren, I make known unto you –

I declare unto you, I make known unto you, I define for you the gospel, wherein ye are saved; how that – to wit, namely –

So according to divine inspiration and definition, if a man preaches the gospel, what he preaches is that Christ died for our sins according to the Scriptures; He was buried, and the third day He was raised for our justification [1 Corinthians 15:3-4; Romans 4:25].

There is another kind of Christianity:  it is a Christianity of redemption.  And it goes like this:  that the human race fell from its high holy communion and fellowship with God; and because of sin, judgment fell upon the human race and it faced death and judgment.  And God in His mercy and in His pity looked down from heaven and saw the man in his desperate need, and out of love and compassion He sent His own Son to die for our sins according to the Scriptures, and to be raised for our justification, to be our great Mediator and Savior in heaven [Romans 4:25].

As there is a great and first commandment [Matthew 22:35-38], so there is a great and first doctrine.  It is this:  that Christ died for our sins according to the Scriptures [1 Corinthians 15:3].  The greatest doctrine is not the fatherhood of God, the virgin birth of Christ [Matthew 1:23], the incarnation of our Lord [Luke 1:26-35, 2:1-16], the doctrine of the kingdom of heaven [Matthew 3:1-2, 4:17], not even of the transcendent return of our Savior [Matthew 24:30]; but the first and primary doctrine of the revelation of Jesus Christ is His atoning death [1 Corinthians 15:3].  It is the center around which all other doctrines and revelations of the Bible converge.  I stood in the Roman Forum one time, and they said that place was the sight of the golden milestone; and all the roads of the Roman Empire were measured from that golden milestone.  The doctrine of the atonement of Christ is the central milestone from which radiate all of the roads, and ways, and arteries, and veins, and highways, and outreach, and message of the Christian faith itself.  Somebody one time came to Charles Haddon Spurgeon and said, "Sir, your sermons all sound alike."  And Spurgeon replied, "That’s right.  For wherever I take my text," replied the great London Baptist preacher, "I make a straight beeline to the cross."  What Spurgeon was doing and saying is nothing but a reflection of the entire revelation of God:  for all of it somehow stands in the shadow of the atoning sacrifice of Jesus Christ.  "I received from the Lord, first of all, how that Christ died for our sins according to the Scriptures" [1 Corinthians 15:3].

The apostle says, "For I received from the Lord, first of all, that Christ died for our sins according to the Scriptures" [1 Corinthians 15:3].  And when I take the Bible to verify the revelation that Paul says he received from God, I find in the Bible exactly that.  I entitled one time, a message I preached here at the church – beginning seven-thirty and preaching past midnight – I entitled it The Scarlet Thread through the Bible.  And you can begin at Genesis in the garden of Eden, in the blood of innocent victims, animals who had done no wrong, but whose blood was poured out into the earth and their skins taken to hide the nakedness of the man and his wife [Genesis 3:21].  You can begin in that encrimsoned earth and follow it through the Word of God; the Old Testament, which we haven’t time to do – but the Passover blood, the blood of the daily sacrifice [Hebrews 9:22-23].   The incomparable meaning of our Lord in Leviticus 17:11, "For the life of the flesh is in the blood:  and I have given it to you on the altar to make an atonement for your souls:  for it is the blood that maketh atonement for the soul."  The description of the coming death of our Lord in Psalm 22 and in Isaiah 53; the whole Old Testament Scriptures, by type and by prophecy, picturing the coming sacrifice of the Savior of the world.

"According to the Scriptures," to us the New Testament now is also the Scriptures.  When Paul wrote this, he was referring of course to the Old Covenant [1 Corinthians 15:3]; but to us the Scriptures are also the New Covenant.  And what I find in the Old Testament of the prophetic foreview of the atonement of our Lord, I find affirmed and confirmed by the revelation of the New Testament Scriptures.  In the very way that the Gospels are made, they focus attention upon the death of our Lord.  However the Gospel may begin, and whatever the signs, and miracles, and words they may choose, immediately they hasten to His passion.  And the latter part of all of those Gospels is largely given over to the last few days – and practically the last few hours of our Lord – depicting for us His sacrifice for our sins.

When the Lord Himself began His ministry, He began it like that:  the great introduction of John the Baptist is an absolute summary of the entire life and work of Christ.  "Look!," said John, "Look!" said John, standing on the banks of the Jordan River as he introduced the messianic kingdom and announced it at hand.  "Look!" said the Baptist, "The Lamb of God, that taketh away the sin of the world" [John 1:29].  And when the Lord began His ministry He said, "Destroy this temple, and in three days I will raise it up" [John 2:19].  They had no idea what He meant; but when we came to know what He meant, it was His death and His glorious resurrection [John 19:1-20:18].  He said to Nicodemus, who came to Him by night, "As Moses lifted up the serpent in the wilderness, so must the Son of Man be lifted up" [John 3:14].   I would think that Nicodemus had no idea what He meant; but when it came that we understood, it referred to the crucifixion and the death of the Messiah Christ.  And when the Lord instituted the recurring ordinance that brings to our mind what the Lord would have us first of all remember, look at it!  He does not say, "These mighty deeds are done for the remission of sins," or, "These signs and miracles are done for the remission of sins," or, "These words of wisdom are said for the remission of sins," but what He does say is:

This is My blood of the new promise, poured out for the remission of sins; this do in remembrance of Me.  For as oft as you eat the bread and drink the cup, ye do portray the Lord’s death till He come, till He come.

And in the light of that Gospel, every apostle took his stand.  In the Scriptures that they left behind, every syllable is inspired by His sufferings and stained by His blood.  One of them could say, "I determine not to know anything among you, save Jesus Christ, and Him crucified" [1 Corinthians 2:2].  And again, "God forbid that I should glory, save in the cross of our Lord Jesus Christ" [Galatians 6:14].  It is not without meaning that the sign and insignia of the Christian faith is not a seven-branched lampstand, it is not two tables of stone, it is not even a halo above a submissive head; but it is a stark, naked, rugged cross on which the Son of God died for our sins [Matthew 27:32-35].

One:  "That’s my sin, I did that."  Oh, it’s easy to say, "The Jews did it, Pilate did it, Judas did it, the soldiers did it, the Roman government did it."  No, "I did it."  We all had a part; our sins drove those nails in His hands, pressed that crown of thorns on His brow; we did it.  Second:  what do I see?  I see there the infinite love and compassion of God.  This He did that I might be saved.  What do I see when I look at the cross?  I see God’s entrance for me into heaven, through the torn veil of His flesh [Matthew 27:51; Hebrews 10:20].  That is what the Hebrews, the Book of Hebrews is all about; that in the sacrifice of Christ, through the rent veil, through the torn flesh, we enter into glory.

What do I see?  Last, I see a call of commitment and dedication from God for me.  Like Count Zinzendorf, who founded the Moravian movement which began the modern evangelization of the world; in DÃ¼sseldorf Gallery, looking at an Ecce Homo, the suffering Christ, and read the words underneath, Quo facis protea.  Quid facis pro mea, "This have I done for thee, what hast thou done for Me?"  And the young nobleman turned, dedicated his life and his fortune to Jesus, and the propagation of the gospel to the ends of the earth.  When I look at the cross, it speaks a like call to me.

Was it for crimes that I have done,

He groaned upon the tree?

And love beyond degree

But drops of blood could ne’er repay

Tthe debt of love I owe,

Here Lord I give myself away,

‘Tis all that I can do

["Alas! And Did My Savior Bleed"; Isaac Watts]

THE
ATONEMENT FOR SIN

A.  Two
kinds of Christianity

1.  One
of idealism, inspiration

a. Salvation
is social amelioration

b.
Jesus is one of the great idealists of the world, a great teacher

2.  One
of redemption and salvation

a. In
social Christianity, cross of Christ incidental – here it is central

B.  Christianity
of the Scriptures is the Christianity of the cross – in its power to save, as
Paul preached it

A.  Not
in time, but in importance

B.  All
four gospels recount suffering and death of Christ

B.
The burden of the New Testament is the atonement of Christ

1.  Gospels
focus attention upon death of our Lord

IV.       Our gospel message of hope and salvation
today

1.  Revelation
of the sin in our own hearts

2.
Love and mercy beyond anything mind could imagine

3.  A
call of commitment and dedication from God for me